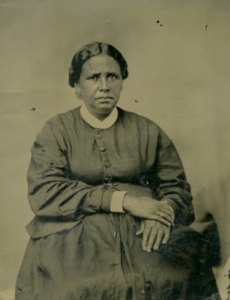 At the time, there were many New Bedford sea captains and crew members who traded down the Atlantic coast who would assist fugitives in their attempts to flee the South. New Bedford had a reputation as an abolitionist stronghold and a place where fugitives were welcomed and protected; slavery had officially ended in Massachusetts in 1783. Amelia, her husband William, and son Robert are mentioned in several slave narratives written by freedom seekers who spent time in New Bedford. Amelia’s name appears in several articles in the Liberator that reviewed the activities of New Bedford abolitionists at anti-slavery rallies in the city and in Boston.

As one of the managers of the New Bedford Female Union Society, she organized one of the first anti-slavery fairs held in New Bedford on January 1, 1840. The fair was held to raise funds in aid of the Liberator newspaper and the Massachusetts Anti-Slavery Society. Women abolitionists supported the activities of the Anti-slavery society by developing special handiwork for sale, collecting and selling the autographs of famous men and women, and selling baked goods. The fairs were usually held once a year and New England cities such as Boston and New Bedford would take turns hosting the fairs. Funds would be used to support the speaking tours of noted abolitionists, pay the printing bills of the Liberator, and on occasion help pay for the freedom of fugitives in danger of being returned to slavery. The New Bedford Female Union Society was an African American women’s anti-slavery group and while women were organized to end slavery, the groups were still by and large segregated. Quoting from a letter signed by Amelia as the manger and published in the Liberator, the group met twice weekly “to ply our needles and fingers, to talk over the wrongs of our countrymen and women in chains, and pray that the time will soon come when every yoke shall be broken.”1

Amelia and her husband helped many fugitives who came to New Bedford by providing shelter and assisting them in managing their new life in freedom. These fugitives are referred to in the letters of abolitionists and conductors on the Underground Railroad as “packages”. Those escaping will remain nameless but Amelia’s role as a conductor will not as her bravery was recorded in the slave narratives of appreciative fugitives. One of the best-known fugitives assisted by Amelia and William was John Jacobs, brother of Harriet Jacobs who shipped out of New Bedford with help from the Pipers. The Piper family served as a go-between for John and his sister, writer and abolitionist Harriet Jacobs while he was out to sea.  Amelia and William Piper were the first members of three generations of a family that were active abolitionists and Underground Railroad activists who fought for the end of slavery in the United States.

Photo of Amelia Piper in the collection of Lee Blake