Nathan and Polly Johnson, prominent African American abolitionists in New Bedford, sheltered escaped slaves in this Underground Railroad ‘station.’ It was here, in September 1838, that Frederick (Augustus Washington Bailey) Douglass found freedom, a new name, and with his wife Anna, his first home in freedom. 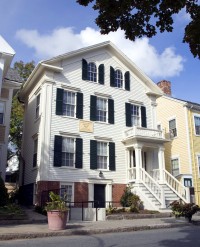 The Nathan and Mary (Polly) Johnson Properties at 21 Seventh Street and 17-19 Seventh Street have been designated a National Historic Landmark by the United States Department of the Interior. This designation came about as the result of the owners’ role in ante-bellum efforts to eradicate American slavery. They assisted escaped slaves, and, in particular, had a connection with famed abolitionist and orator Frederick Douglass.

After escaping slavery in Maryland, Frederick Augustus Washington Bailey and his wife, Anna (Murray), arrived in New Bedford on September 17, 1838. Fortuitously, they were met in Newport, Rhode Island by Quakers Joseph Ricketson and William C. Taber. Nathan Johnson, one of New Bedford’s most active abolitionists, who gave him refuge in his home at 21 Seventh Street and the name Douglass by which he was forever after known.

Records of the New Bedford Overseers of the Poor document that at least one other escaped slave found shelter at 21 Seventh Street. Based on Nathan Johnson’s anti-slavery activities in 1822, it is very likely that other fugitives were harbored in this house as well as in the first Society of Friends Meeting House at 17-19 Seventh Street, which was purchased by the Johnson’s circa 1830. Nathan Johnson (1797-1880), operated a store and was one of the City’s leading confectioners and his wife Mary (1784-1871) also known as Polly, was a well-known caterer.

The Nathan and Polly Johnson House is located within the County Street Historic District and was listed in both the National and State Registers in 1976. The Johnson House was purchased by the New Bedford Historical Society, with assistance from the Waterfront Historic Area League (Whale), and the Massachusetts Historical Commission in December 1998.

The Johnson House is actually two structures that were joined together during the 1850s, 1 circa 1820s structure and a circa 1857 structure that was added onto the earlier building. The front part was built in the attic. The rear portion resembles a vernacular Georgian/Federal building.