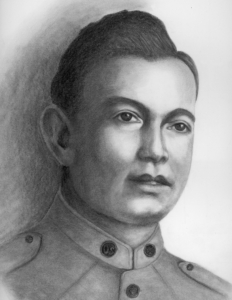 Joseph J. Monte aka Jose Jaime Monteiro was born in Fogo, Cabo Verde on November 25, 1888. He immigrated to the United States in September of 1900 and became a United States citizen on May 5, 1919. He enlisted in the United States Army on March 19, 1918 during World War I and was assigned to Company H with the 307 th Infantry Regiment. During the War, Private Monte participated in the Oise-Aisne Offensive and the Baccarat and Vesle Defensive. He was wounded on July 5 at the battle of Alsace Lorraine and despite being wounded, he continued at the Battle of Fismes where he was seriously wounded. Pvt. Monte was taken as prisoner of war to Anhault-Zerbst, Germany where he was held until his release in December 1918. Upon his release, he was hospitalized in England and when he returned to the United States he was Honorably discharged on May 22, 1919. In January of 1935, Veteran Joseph J. Monte was awarded the Purple Heart, the first known Cape Verdean American. He died on March 26, 1935 and is buried in Saint John’s Cemetery, New Bedford, Massachusetts. In 1938, the City of New Bedford honored him with the naming of Joseph J. Monte Playground, on the site of the former Vocational High School.
-New Bedford Historical Society