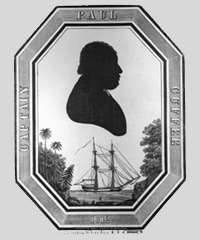 1759 – 1817
Cuffe was a Black philanthropist, merchant, sea captain and abolitionist. The son of a former African slave father and American Indian mother, Cuffe was born on the island of Cuttyhunk, Massachusetts, near the commercial port of New Bedford. Later persuaded “that commerce furnished to industry more ample rewards than agriculture,” he prepared himself for that field by becoming proficient in mathematics and navigation. Keenly opposed to discrimination against his people, Cuffe championed their cause with an intensity that might be expected of a less successful man. But his wealth was no shield against racism, and his problems reveal as much about its long arm as about the difficulties encountered by a black person in America.

A nationalist and Quaker, he was shaped by the major currents of his era. The concerns of his people did not alone define his interest, but they were at the center of his life and accounted for much of his influence. It was through his efforts that Blacks were granted the right to vote in Massachusetts in 1783. Most of Cuffe’s life was spent in Westport, a Quaker enclave in southwestern Massachusetts where in 1797 he bought a farm for $3500. He had earned his fortune from whaling and trade in the Americas and Europe. He owned shares, over a period of time, in up to ten ships, and the financial support of the Friends and their doctrine figured in his success as a businessman. They captained some of his ships and like him, believed that the virtues of the counting house, such as industry and frugality, were pleasing in the sight of God.

Cuffe’s faith was a factor in his using a substantial portion of his wealth to help others, building an integrated school when the community failed to do so and contributing to the raising of a new Friends meetinghouse in Westport. Cuffe’s interest in Africa stemmed in part, from his father having been born there. Cuffe promoted colonization in Sierra Leone, and took a group of thirty-eight black settlers there in 1811. The success he achieved, as a Black captain with Black crews was evidence of the black expertise thought essential to the redemption of Africa. His voyage there in his own ship in 1815 with emigrants from America and his financial success anticipated ideals later associated with black nationalists from Henry Highland Garnet to Marcus Garvey. This complex man, like Bishop Henry M. Turner later in the century, was certain enough of his own vision to risk association with the American Colonization Society, whose motives regarding the return of blacks to Africa were highly suspect in black leadership circles.

Cuffe, though working to uplift of his people, accepted support from white allies, and though struggling for Black rights in America assisted in the regeneration of Africa. He made an impact on his time sufficient to begin a tradition, and that, perhaps, is his greatest legacy.

In September 1818 large numbers of people were present at his funeral in Westport. Paul Cuffe was buried in the Friends cemetery there.

Here is an updated resource of Paul Cuffe as of 2019: http://paulcuffe.org/