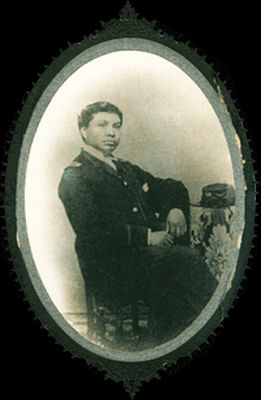 William B. Powell Jr., one of the first African American physicians to receive a contract as a surgeon with the Union Army, was free born in New Bedford, Massachusetts in 1834.  His father, William Powell Sr., also in the medical practice, was African American, and his mother was Native American.  When Powell was young he found work in New York as an apothecary, sparking his interest in medicine.  In 1851, Powell Sr. moved the family to Liverpool, England to escape the fugitive slave laws, and the younger Powell spent much of his young adult life in England.  It was there that he is believed to have received his medical training from the College of Physicians and Surgeons in London; although adequate documentation does not exist, so it is uncertain whether or not he received a degree.  Powell returned to New York with his family in 1861 and began practicing medicine.

By 1863, African Americans were able to serve in the Union army and in May of that year Powell applied to contract with the army as acting assistant surgeon.  He was assigned a position in April at the Contraband Hospital (later Freedman’s Hospital) in Washington D.C., so named for its care of fugitive slaves and black soldiers.  In October of that year, Powell took charge of the hospital as head surgeon Major Alexander T. Augusta left to serve with the 7th U.S. Colored Infantry.  Powell remained at Contraband Hospital until November of 1964.

Powell continued to practice medicine until declining health and disability forced his retirement in 1891.  He began to petition the U.S. government to grant him an army pension, which was always denied on the grounds of insufficient medical evidence of his disability and because he was a contracted surgeon, not a military officer.  In 1902, he returned to England to care for his dying brother and remained there until his own death in 1915 at the age of 79.  William B. Powell never received his military pension.

THE REVEREND WILLIAM JACKSON: HAND-IN-HAND FOR LIBERTY AND EQUALITY (Virtual...
Scroll to top