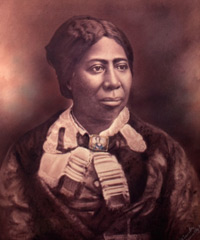 Anna Murray Douglass is best known as the first wife of black abolitionist Frederick Douglass. Her life illustrates the challenges facing women who were married to famous men.

Born as a free black in rural Maryland, her parents, Mary and Bambarra Murray, were manumitted shortly before her birth. She grew up in Baltimore, where she met a ship caulker six years her junior, Frederick Washington Bailey.  Although it is unclear how they met, Murray facilitated his second escape attempt by providing money for a train ticket and a sailor’s disguise.  She followed him to New York City, where they were married by the prominent black minister, Rev. J.W.C. Pennington.  They adopted the surname Douglass when they moved to a Quaker community in New Bedford, Massachusetts.

While Frederick began his climb as an abolitionist orator, Anna cared for their children, born between 1839 and 1849: Rosetta, Lewis, Frederick, Charles, and Annie. In 1847, they moved to Rochester, New York, where Frederick began publishing his newspaper, the North Star. The gulf between Anna and Frederick widened over the years; she could barely read and write and was rarely a part of his activist life and growing circle of prominent white and black abolitionist colleagues.

Anna believed that her role was to care for the children and her husband which she did admirably while Douglass was often away on the anti-slavery lecture circuit. She cared for her family earning funds as a seamstress and with other domestic talents. After the death of their youngest child, Annie, in 1860, Anna’s health steadily deteriorated.  She died on August 4, 1882 at their home, Cedar Hill, across from Washington, D.C.  She was carried back to Rochester, New York, where she was buried in Mount Hope Cemetery.