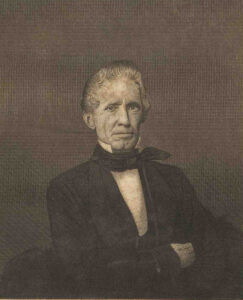 Born in 1802 in southern New Jersey, near Delaware Bay, Daniel Drayton was awakened to the inequities of slavery through years of working on coasting vessels running between Savannah at the South and St. John’s, New Brunswick.

“There is not a waterman who ever sailed in Chesapeake Bay who will not tell you that, so far from the slaves needing any prompting to run away, the difficulty is, when they ask you to assist them, to make them take no for an answer,” he later wrote. “I have known instances where men have lain in the woods for a year or two, waiting for an opportunity to escape on board some vessel.” Becoming convinced that he was bound to help slaves escape to the North, Drayton tried and failed several times before successfully taking a family from Washington, D.C., to Frenchtown, New Jersey, in 1847. His next effort, to take seventy-seven slaves between the same two ports the following April, was revealed to several owners and foiled, ending in the sale of most of the slaves on the New Orleans market and the imprisonment, despite numerous appeals, of Drayton and his two assistants for more than four years.

In the summer of 1852 Massachusetts Senator Charles Sumner presented a petition for Drayton’s release that had been initiated by Drayton’s wife and signed by twenty-one of the forty-one owners whose slaves attempted to escape on the Pearl. Sumner persuaded  President Millard Fillmore, who had just lost the Whig nomination for president, to pardon and release Drayton, and on 12 August 1852 he returned to his impoverished wife and children in Philadelphia. Just three weeks later, on 9 September, Drayton came to New Bedford, a port he had often visited in his earlier coastwise voyages, and spoke before a large crowd of both races at Sears Hall to, the New Bedford Standard reported, “marked effect.” There his account was corroborated by Charles Thomas, a man of color who had come to New Bedford from Washington with his wife Hannah about 1851. Thomas, who then worked as a laborer and lived at “Mormon Hall,” a boardinghouse on lower Howland street, offered the audience “quite a graphic description of several scenes which came under his immediate observation, connected with the affair.” Drayton also spoke in South Dartmouth, and both meetings took up a contribution for Drayton, who was struggling financially and physically after his long his imprisonment.

In January 1854 he came to Massachusetts on another lecture tour. The Boston Commonwealth reported that month that Drayton, a “noble man and generous hero,” had just left town on the Monday past, “doubtless never to visit us again. His constitution was wholly broken down by his imprisonment, and since his liberation, his little remaining health and strength have been continually wasting. He came on here a few weeks since, hoping to spend some time in Massachusetts, in traveling, and selling his narrative, (which has just been published,) and thus do something for his own support. . . . He is entirely destitute.” Still, in the summer of 1855 Drayton proposed another large-scale rescue, this time from the ports of Norfolk and Portsmouth in Virginia, to Francis Jackson of the Boston Vigilance Committee. “Without some ally there you will be much more likely to be betrayed than before-” Jackson wrote; “Your feeble state of health is strongly against it.”

By the summer of 1857 Drayton had returned to New Bedford, apparently in no better spirits than he was when he left Boston three years earlier. The account of his last days appeared in the 2 July Republican Standard that year, an excerpt of which follows:

In consequence of low spirits, probably induced by broken health, Capt. Drayton has probably for sometime meditated self-destruction. He met an old friend, Wm. Bush, in this city, on Wednesday last week, and observed that he came here to die, and wished to be properly interred. His friend received the sad remark as a jest. But alas! that noble heart has ceased to pulsate; that self-sacrificing soul has gone to its home with the Heavenly Father. Capt. Drayton stopped at the Mansion House, in this city, on the same evening; entered his name as from Philadelphia; took a room, without supper; and requested not to be called, as he was exhausted and nearly sick from want of rest. He retired to his room at 6 o’clock P.M.; and, not appearing by 4 o’clock P.M. on Thursday, the door was broken open. He was found lying on the floor in an easy position, with a laudanum vial-in which he had obtained 1 ½ oz. at a drug store in this city-empty on the table. He had also severed arteries in both legs, with the view, doubtless, of preventing spasms from the effect of the laudanum. By these wounds he lost considerable blood in a wash-basin. He had no baggage, but about $12 in money was found on his person.

Coroner Edwards summoned a jury of inquest and, on due consideration, they returned a verdict of death by suicide, in accordance with the above facts. Some friends, who knew and reverenced the departed, have attended to his proper entombment.

Daniel Drayton is buried in New Bedford’s Rural Cemetery. Black activist Henry O. Remington and the New Bedford Union Club, an organization of men of color, paid for perpetual care of Drayton’s lot, and Navy chaplain Photius Fisk donated funds for the erection of a monument to Drayton in 1857. Boston fugitive assistant Austin Bearse dedicated his Reminiscences of Fugitive-Slave Law Days in Boston to Fisk, Drayton, Jonathan Walker, and Charles Turner Torrey. Fisk’s fugitive activity is not known, but Drayton, Walker, and Torrey all went into slaveholding areas to take an active hand in assisting escapes, and all were imprisoned for their efforts; Torrey, born in Scituate, Massachusetts, died in prison in 1846.