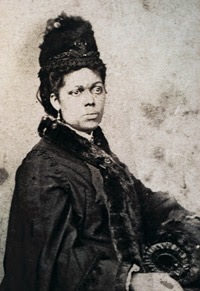 University faculty member and public school administrator Martha B. Briggs is noteworthy for her service in the preparation of schoolteachers in the nation’s capital.

Martha Briggs was a member of the Normal School Preparatory Department of Howard University, 1873-79, principal of Minor Normal School, 1879-83, and principal of the Normal Department of Howard University, from 1883 until her death in March 1889. During that time, Briggs participated in the efforts at the District of Columbia public schools and at Howard University to prepare men and women to teach. These new teachers taught not only in the District but also in schools in the South- serving in the latter almost as young missionaries.

Martha B. Briggs was born of John and Fannie Bassett Briggs in New Bedford, Massachusetts. She was educated in that New England town and first taught in her father’s home on Allen Street. There, Martha taught self-emancipated people how to read and write in an evening school set up for those who made it to New Bedford on the Underground Railroad.  Seeking a full time teaching position, Briggs left New Bedford for Easton, Maryland and then in 1869 moved to Washington, DC. She remained in the District for the next twenty years.

With four years’ experience as teacher and principal in the Washington, DC public schools, Briggs left the public school system in 1873 to begin her career at Howard University. The Howard University Catalogue, 1873-74, records the Normal Department Faculty and identifies Martha Briggs as “Instructor in Normal Department.” Briggs is identified in later years as an “Instructor in Mathematics.”

The performance of Briggs at Howard University as an instructor in the Normal Department for the six-year period 1873-79 drew the attention of the public school leadership. When the board of trustees for the District of Columbia assumed authority over the Minot Normal School in 1870, the board offered the position to Briggs and she accepted.

Assuming leadership of an institution that had been inaugurated by Myrtilla Miner in December 1851, Martha Briggs was praised at the conclusion of her first year. In June 1880, Briggs received the commendation of the board, “We express the belief and hope that the Minor Normal School, whose first year has proven so successful under the earnest and faithful charge of its principal, Miss Martha B. Briggs, will eventually not only supply the colored schools of the District with educated and earnest teachers, but that it will in a measure contribute to supply the demand of the South for colored teachers for the colored race.”

Minor Normal – often officially recorded as Washington Normal School No. 2 – was a relatively new school building. Minor had been built in 1876 by the trustees of the Minor Fund Board, a legal institution flowing from its creation in 1863 by the U.S. Congress of the “Institute for the Education of Colored Youth.” In addition, the Minor Fund Board’s financial support for the Normal Department of Howard University in 1871 resulted in Myrtilla Miner Hall (a dormitory for girls at Howard).

Martha B. Briggs was returned to New Bedford, MA, her birthplace, for her burial. A memorial to her life and service was held by the Bethel Literary and Historical Association. Furthermore, Howard University memorialized her with a tablet placed on the wall of Andrew Rankin Chapel on the campus. In its March 1934 Founder’s Day program, Miner Teacher’s College celebrated her service as the third principal of Miner Normal School.