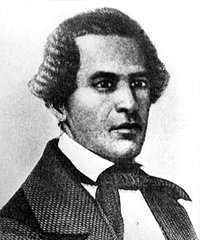 Brown was sold multiple times before he was 20 years old. He spent the majority of his youth in St. Louis. There his masters hired him out to work on the Missouri River, then a major thoroughfare for the slave trade. He made several attempts to escape, and on New Year’s Day in 1834, he successfully slipped away from a steamboat at a dock in Cincinnati. Brown moved to Buffalo, N.Y., and spent nine years there working simultaneously as a steam boatsman on Lake Erie and as a conductor for the Underground Railroad.

In 1843, Brown began lecturing on his experiences in ending slavery for the Western New York Anti-Slavery Society, one of many American abolitionist groups. Brown eventually also became a lecturer on behalf of women’s rights and temperance, but it was as a fugitive slave speaking on the evils of slavery that he was best known.

In 1847, Brown wrote the “Narrative of William W. Brown, a Fugitive Slave,” which went through four American and five British editions in its first three years after publication. At this time, Brown worked for the Massachusetts Anti-Slavery Society and lectured around the country. His family life began to unravel and he went through a difficult divorce. He entrusted the education and care of his two daughters, Clara or Clarissa and Josephine to Nathan Johnson, a well-known African American abolitionist in New Bedford, MA. Brown’s daughters lived at 21 Seventh Street until at least 1850. Between 1849 and 1854, he gave more than a thousand speeches in Europe and America and wrote two books. “Three Years in Europe; or, Places I Have Seen and People I Have Met” and “Clotel, or, the President’s Daughter: A Narrative of Slave Life in the United States.”  “Clotel”  is considered the first African American novel.

In 1854, some of Brown’s friends raised enough money to purchase his freedom, allowing him to return to the United States,” became the first drama published by an African-American. As the environment became increasingly dangerous for blacks in the 1850s, he became a proponent of African American emigration to Haiti. Like some other abolitionists, he also decided that more militant acts were necessary to gain progress in their cause.

Over the next two decades, he focused on historical works. These included two histories of the black race, another history on blacks and whites in the American South, and a rare military history of African-Americans in the American Civil War. Brown eventually settled in Boston and practiced medicine there until his death from cancer in Chelsea, MA, 1884.