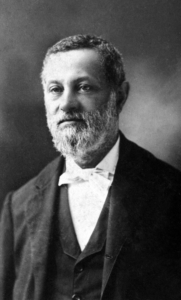 William Bush (1798-1866), a free man of color born in Loudoun County, Virginia, may have been the most active Underground Railroad assistant in New Bedford.

He was the son of William Bush, born in Maryland, and Nancy Grimes of Loudoun County, and the uncle of Leonard Grimes, later minister of Boston’s Twelfth Baptist Church, nicknamed the “fugitive slaves church.” Grimes, also born free in Loudoun County, had been imprisoned in the early 1840s on the charge of having helped a family of eight slaves escape Virginia in 1839. While serving his term, Bush was charged with caring for his nephew Grimes’s family. After his release in 1845 Grimes moved to New Bedford, ran a grocery and clothing store, and left after three years for Boston, where he began Twelfth Baptist Church.

By the end of the next year, 1849, William Bush and his family had moved to New Bedford. Why they moved is not precisely known, but several motives may be suggested. First, Bush’s wife Lucinda Clark, whom he had married in Washington, D.C., in 1820, already had siblings living in New Bedford—her sister Mary, married to Lewis Temple, and her brother Archibald, who had lived in New Bedford since at least 1832. Second, both William and Lucinda Bush are believed to have been active in Underground Railroad assistance in the capitol area. Lucinda may have been involved in the attempted rescue of seventy-seven slaves aboard the schooner Pearl in April 1848. In the ill-fated attempt, which ended in the imprisonment of Captain Daniel Drayton and the sale of most of the slaves, Lucinda Bush is said to have gone to homes in Washington to take the hopeful escapees to the Pearl. That Drayton and William Bush knew each other seems well established. When Drayton killed himself in a New Bedford hotel in 1857, the newspaper termed William Bush Drayton’s “old friend” and noted that Bush was the last person to see Drayton alive. Even though Bush and most if not all of his family were free, he may have worried that Lucinda’s reputed role in the Pearl escape attempt would come to light and cause her arrest and possible return to slavery and so chose to move north.

Bush may first have worked as a grocer in New Bedford, but from 1855 until his death in 1866 he operated a series of boarding houses on the south side of the port’s waterfront. Like William P. Powell before him, Bush probably ushered more than a few fugitive slaves through these lodgings onto whaling and coastal trading vessels.

Bush’s granddaughter Anna Jourdain Reed noted in one reminiscence that many fugitives came to the door of his boarding house, “of times in groups of five, six or more.” One fugitive who found shelter with Bush was George Teamoh, whose narrative is in the collections of the Library of Congress: “Quite a large number of fugitives for a time stayed at his house and received the same hospitalities as did his regular boarders, notwithstanding the former were not able to pay their way. If any reliance may be placed in the statement of many of the older citizens of N.B. Deacon Bush,—now deceased,—has been one of the most zealous, hard working and liberal friends the fugitive ever found.

Over such, I have often seen him weep in bitterness of soul while rendering all the aid and comfort within his power. In this respect he did what he believed constituted one of the most essential principles of his profession as a christian, “love thy neighbor as thyself.” Mr. Bush has sacrificed much in delivering numbers of our people from the many deep distresses consequent upon human oppressions. . . . Mrs. Bush, indeed the whole family were not less humane in their devotions to mortal sufferers. . . . No better Patriot, none who could enter more fully in to the feeling and measure the depths of human woes—ever trod the soil of New England.” Bush may have retired from the boarding house business by the time the war began. In the 1860s he and his family were living at 128 Third Street in New Bedford, the longtime home of his wife’s brother Archibald Clark. “Many fugitives from slavery found refuge beneath this roof,” Bush’s granddaughter Anna Jourdain Reed has written. In the last years of his life he was a laborer and “was well known for the last few summers,” the newspaper noted, “in the business of sprinkling the principal streets.” He died in October 1866 and is buried in Rural Cemetery in New Bedford. Bush’s son Andrew began a clothes cleaning business that continues to operate under the family name in New Bedford.