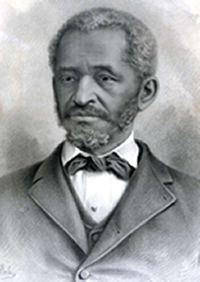 Stemming from his early experiences in slavery, to his prominent leadership role in Boston’s Black community, Lewis Hayden dedicated his life to fighting for freedom, equality, and justice for all Americans. At his funeral service in 1889, the minister eulogizing him said, “The secret of the success in Lewis Hayden’s life is that he lived for others. He was, indeed, a prince among us.”

Born in Lexington, Kentucky, Hayden experienced the horrors of slavery first hand. He witnessed the brutal torture that disobedient slaves received from their masters. He saw his brothers and sisters sold away on the auction block. As he told Harriet Beecher Stowe in the Key to Uncle Tom’s Cabin, his own mother, in one of her reoccurring fits of insanity, once tried to kill him so that he would not have to suffer in slavery; “I’ll fix you so they’ll never get you!,” she screamed at him before being taken away by the jailers.

While still enslaved, Hayden married and fathered two sons, one of whom died shortly after birth.  His wife and remaining child belonged to a different master than his own.  They were property of Henry Clay, one of the future architects of the 1850 Fugitive Slave Law, which Hayden later fought so hard to undermine.  Despite his pleas and efforts to stop the sale, Hayden watched as Clay sold his wife and child down river, to the slave traders, never to see them again.  Looking back years later, Hayden wrote, “I have one child who is buried in Kentucky and that grave is pleasant to think of.  I’ve got another that is sold nobody knows where, and that I can never bear to think of.”

Hayden soon remarried Harriet Bell and treated her son, Joseph, as his own.  Determined not to see his new family destroyed by slavery, Hayden chose to claim his freedom by escaping on the Underground Railroad.  Assisted by Calvin Fairbank and Delia Webster, the Haydens made their way to the North.  After going first to Canada, then Detroit, then to New Bedford, the Haydens finally chose to permanently reside in Boston.  As a major center of the Abolition Movement and home to one of the most active free Black communities in the country, Boston was the right place for Hayden to help lead in the struggle against slavery and assist those seeking to escape it.

Hayden quickly established himself as a prominent activist and leader in Boston.  Considered a “Temple of Refuge,” his home on Beacon Hill served as a safe house for hundreds of freedom seekers making their way through the city.  To ward off slave catchers, Hayden armed himself ‘to the teeth’ and stationed guards in his home.  He allegedly threatened to ignite barrels of gunpowder stashed in his house if slave catchers dared to enter in search of William and Ellen Craft, the famous fugitive slave couple who escaped the South disguised as master and slave.  He also led the successful rescue of Shadrach Minkins, a fugitive slave arrested in Boston who would have been sent back South had not Hayden and a mob of abolitionists stormed the Courthouse and freed him from his captors.  A strong proponent of direct militant action, Hayden did whatever it took to protect fugitive slaves in their quest for freedom.

In addition to his work on the Underground Railroad, Hayden engaged himself in many other activities to promote freedom and justice for all.  He helped lead the struggle to desegregate Boston’s public school system.  As an active Prince Hall Mason, he tirelessly fought for equality and to help others less fortunate than himself.  He campaigned vigorously for women’s rights and led the successful battle for a Crispus Attucks Memorial on Boston Common.  He raised weapons, men, and money for John Brown’s raid on Harper’s Ferry.  After convincing his friend, Governor John Andrew, to establish a black regiment, he recruited for the 54th Massachusetts, the first black fighting unit from the North during the Civil War.  He also served as Messenger to the Secretary of State for Massachusetts and was elected to the state legislature by the citizens of Boston.

Through undaunted dedication and leadership by example, Hayden rallied countless supporters in the struggle against slavery and oppression.  His accomplishments are a testament to the power of active resistance in the quest for social justice and change.  Today, his life continues to inspire new generations of activists dedicated to helping others secure their unalienable human rights.  At the same time, his story also serves as a powerful reminder to us all that freedom is a constant struggle.